Peacemaker Corps Association believes that each and every youth can be a peacemaker in their community, harnessing modern technology to make the world a compassionate, safe and tolerant place in which to live. 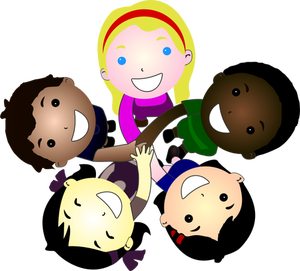 TRAINING
Workshops take place over two days in a shopping mall or safe specific space in refugee camps. This neutral ground, considered by conflict resolution professionals as a “safe space” where teenagers can leave their cliques, gang affiliations and community biases at the door. Creating these zones helps them create an environment that is conducive to learning and sharing. Invited students register and receive their Peacemaker Kit; which consists of their laminated identity card, Table tent card, and the professionally bound training manual. They are then seated in a half circle and are encouraged to actively participate in discussions. This hands-on, active learning approach generates thought-provoking conversation that has a lasting effect on the students’ mindsets and behaviors.

The first day consists of town-hall interactive discussions about diversity, terrorism, conflict, and youth violence. Students then participate in awareness activities to identify their own reactions to conflict. The second day consists of interactive exercises focusing on mentoring and ethics and concludes with a workshop on community organizing.
GRADUATION CEREMONY
Following the intense workshop, a graduation ceremony honoring the Peacemakers is held in center court of the mall. This ceremony serves two purposes. The first is formal recognition of the students’ achievements and second is to provide a forum for the graduates to meet local governmental officials and organizations that support their efforts to better their community. Graduates are awarded a Peacemaker Corps graduation certificate, a beautiful multi-colored custom designed medal, and a T-shirt identifying them as members of the Peacemaker Corps.

Past graduation ceremonies and Festival award ceremonies have received extensive media, radios, TV, Cable and a very robust Social Media presence. we have over 2.5 million followers on Twitter with all of our supporters, The first two year our global TV, cable and Dish TV brought us to 350 million households, expanding our film makers potential TO A WORLD-WIDE AUDIENCE. With the move into our Peace in the Streets Global Film Festival,, the bully pulpit of the United Nations has a great effect on our audience. Learning to reach youth through electronics; Website, Mobile App and our many media partners is our pathway to teach our core program with our unique skills.

We are a non profit we need your help!

All our services and materials are free of charges. We need all the help we can get to keep all these resources free.

By Ambassador Anwarul Chowdhury – Ambassador Anwarul Chowdhury is former Under-Secretary-General and High Representative of the UN; chairman of the UN’s Administrative and Budgetary Committee in 1997-1998 that approved Kofi Annan’s first reform budget; initiator of the Security Council resolution 1325 underscoring women’s equality of participation; and a well-known analyst of the UN system’s work.

NEW YORK, Oct 14, 2016 (IPS) – United Nations’ apex forum, the General Assembly elected the next Secretary-General yesterday by acclamation rubber-stamping the recommendation of the Security Council (SC). I am appalled by the choice of 15 members of the Security Council of another man following eight others in 70 plus years of UN’s existence as if only men are destined to lead this global organization.
The Council members were totally insensitive to a groundswell of support worldwide for a woman as the next Secretary-General. They advanced the legacy of ignoring the 50 per cent of humanity in their action. This is an absolute aberration of the system whereby the 15 members of the Council impose their choice prompted by P-5 pressure and manipulation upon the total membership of 193, not to speak of wide swath of civil society opinion and activism for a woman Secretary-General.

It is so very unfortunate that in the selection process politics has trumped women’s equality, violating UN Charter’s article 8 which underscores the eligibility and equality of men and women to participate in any capacity in all its organs – principal or subsidiary.
The grapevine is spreading that one of the East European women candidates would get the post Deputy Secretary-General (D-SG) as a part of the deal about the new SG. This is not a big deal as we already had two woman DS-Gs in the past.
It should also be remembered that when the DS-G post was created in 1998 by the General Assembly, it was the understanding that if the S-G is from an industrialized country, the DS-G would be from a developing country and vice-versa. Similarly, if the S-G is a man, the DS-G should be a woman – no possibility of vice-versa till now. This double balance in UN’s two highest posts has been ignored on occasions in recent years.
I would also underscore that the new S-G should bring in a true and real 50-50 gender balance at the level of Under Secretaries-General (USGs) and Assistant Secretaries-General (ASGs). This is an action which should be clearly laid down in a transparent way within the first 100 days in office.
UN General Assembly’s 70th President Mogen Lykketoft’s praiseworthy initiative for exposure of the candidates to wider membership and civil society did not have any impact of the predominant political process in the Security Council. Doing well in a Q&A is not a shortcut to the world’s most demanding job.
I believe strongly that a most practical and feasible way to prevent such Security Council’s choice imposition– though the UN Charter envisages as such– the General Assembly should decide to also hold straw polls on all candidates the way Council does to send a signal about how the majority of UN membership is expressing their choice. This can be done informally like the SC straw polls but made public and transmitted to the Council.
This will at least tell the world how the UN membership as a whole is assessing the candidates and hopefully will have an impact on the Council’s choice. All this can be done without amending the Charter or disrespecting any of its provisions.
Like any leader of an organization, the UN leader’s success or absence of it depends on his team. That is another area I belief needs a total overhaul in UN. It is long overdue. As in case of any new corporate CEO, each time the UN’s Chief Administrative Officer – that is how the S-G is described in the UN Charter – gets elected or reelected, interested quarters wonder whether he will introduce any new guidelines on senior appointments, and will he be subject to pressure from the big powers — as it happened with his predecessors?.
In that context, it is strongly felt that the UN’s so-called political appointments at ASG and USG levels should be more transparent and open. The pressures from Member States and personal favoritism have made the UN Charter objective of “securing the highest standards of efficiency, competence and integrity” (article 101.3) almost impossible to achieve.
It is also to be kept in mind that for his (yes, still it is “his”) own appointment, the incoming Secretary-General makes all kinds of deals – political, organizational, personnel and others. And those are to be honored during first years in office. That then spills over for the second occasion when he starts believing that a second term is his right, as we have seen in recent years.
The tradition of all senior management staff submitting their resignations is only notional and window-dressing. The new Secretary-General knows full well that there is a good number of such staff who will continue to remain under the new leadership as they are backed strongly by influential governments. In the process, merit and effectiveness suffer.
It is a pity that the UN system is full of appointments made under intense political pressure by Member States individually or as a group. Another aspect of this is the practice of identifying some USG posts for P-5 and big contributors to the UN budget.
What makes this worse is that individuals to these posts are nominated by their governments, thereby violating article 100 of the UN Charter which says that “In the performance of their duties the Secretary-General and the staff shall not seek or receive instructions from any government or from any other authority external to the Organization.”
The reality in the Secretariat does not reflect the Charter objectives – I believe it never did. One way to avoid that would be to stop nomination and lobbying – formally or informally – for staff appointments giving the S-G some flexibility to select senior personnel based on “competence and integrity”. Of course, one can point out inadequacies and possible pitfalls of this idea. But, there the leadership of the S-G will determine how he can make effective use of such flexibility being made available to him.
A very negative influence on the recruitment process at the UN, not to speak of senior appointments, has been the pressure of donors – both traditional and new ones – to secure appointments of staff and consultants, mostly through extra-budgetary resources and other funding supports. This has serious implications for the goals and objectives as well as political mission and direction of the UN in its activities.
No Secretary-General would be willing or be supported by the rest of the UN system to undertake any drastic reform of the recruitment process for both the senior management or at other levels. Also, at the end, he has to face the Member States in the General Assembly to get their nod for his reforms.
Yes, opposition will be there, both from within his own Secretariat and from influential Member States, but the determination and effectiveness of leadership of the new S-G will be tested in having the courage to push a drastic overhaul of the appointments and recruitments practice within the UN system as a whole.

On these rallies will be shown a PEACEMAKER CORPS Video presentation which will include:Peacemaker promo – A video presentation of PSGFF winners films. Introduction of the mobile app. PCA will provide Video Camera and tech support for attending youth to make their films about “what Peace in The Streets means to me”. Films will be uploaded on the Peace App and submitted directly to the PSGFF app on their phone. All youth making films will be given specially designed tee shirt and PCA medal. All mall attendees will have opportunity to upload Peace App for free. Make a selfie video that says “I’m a Peacemaker Now, get a prize.

Youth compete by submitting videos of up to five minutes long on What Peace In The Streets Means to Me at psgff.com. There are three age categories: eight and under, nine to 13, and 14 to 18. Winners will be honored at an awards ceremony to be held at the United Nations in New York City. There will be another day of activities at the Paley Media Center hosted by our partners Plural+ with youths from all over the world. For more: PSGFF.COM 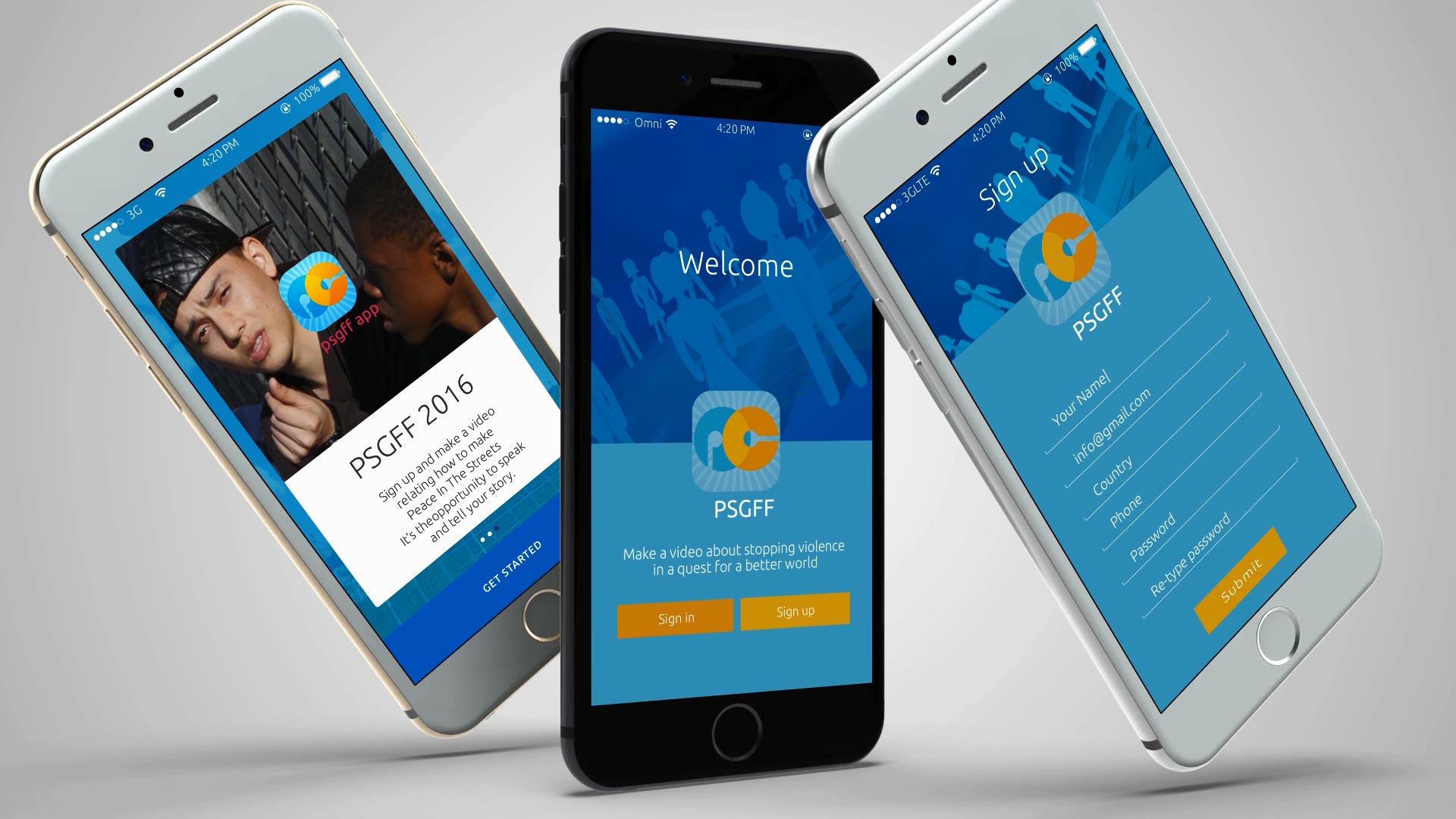 Presented with the Peacemaker Corps Award byUNICEF representative at the UN.