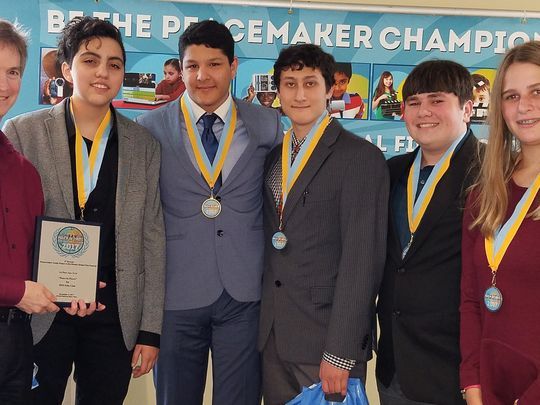 Ridgewood High School’s Film Club won first place for its “Peace in Pieces” project for the Peacemaker Corps’ Peace in the Streets Global Film Festival. It’s the first time the club participated in a contest.

“We were all extremely surprised and incredibly proud of each other,” said the club’s president, Srinjoy Bhattacharya, who founded the group in 2015 as a freshman. “The most powerful response we got was from the people of our school who showered us with love and respect after hearing about this and continue to do so.”

The club received the award at a luncheon held on Nov. 9 at the United Nations. New York City officials, UN dignitaries, parents and friends were in attendance.

“The festival at the UN was one of the greatest events to experience,” said club member Alec Toner. “We were surrounded by people who shared similar love, aspirations and mindsets as us.”

The Peacemaker Corps Association, a non-governmental organization that seeks to promote peace, tolerance and nonviolent conflict resolution around the world, was founded in 1997 through a collaboration of Friends of the United Nations, the Department of Housing and Urban Development and the Simon Youth Foundation.

The purpose of the festival is to empower and give a voice to young people who may not otherwise have access to filmmaking technologies.
“Storytelling has become the non-threatening, user-friendly go-to tool that’s adaptable to so many situations,” said Suzanne Harvey, executive director of the festival.

“When I had found out the club had won first place, I was shocked,” Alec said. “We definitely weren’t expecting to get anywhere near winning the award.”

The theme for this year’s festival was peace in the streets from youths’ point of view. A distinguished international jury panel selected the winners of the contest. “Clearly the film touched a nerve in all,” Harvey said.

“Peace in Pieces” is about “three people of different cultural backgrounds and sexual orientations expressing their individual voices about their position in society, taking a stand against discrimination and prejudice,” said Srinjoy.

The club spent two months brainstorming the film’s plot. “We wanted to make something powerful that gets our message across efficiently,” Srinjoy said.

“As a rather diverse group, many of us being parts of minority groups, we wanted to make a statement on the world peace issues happening in our country today,” Alec said. “This contest was an opportunity to put our two cents in on the truth behind achieving world peace.”

The club finally chose a storyline an hour before they were set to start shooting.

“We decided where to shoot and wrote the entire script in a matter of 45 minutes,” Srinjoy said. “We then worked really hard on the execution.”

“To me, the film stands out because of its simple but very powerful method of telling their story,” Harvey said. “Each member of the cast expresses their understanding of what happens to those that may not fit in and then show the importance of counteracting that with words of strength.”

The club placed first in the category for participants aged 14-18 years old. The festival received entries from students in six continents and more than 14 countries.

The UN also gives winners the opportunity to collaborate with other filmmakers across the world.

“There were people from many different countries and completely different walks of life coming together to celebrate world peace,” Alec said. “That alone was a beautiful experience.”